Today's real estate market has become somewhat of an unpredictable anomaly. Now, before I begin to explain what I see happening in the Greenville real estate market, let me preface this by saying that real estate trends, in general, tend to be local. That means that when you read about the housing statistics that come out and affect our economy, those are many times national figures and they can be quite different than your local statistics. Just because housing starts might be down nationally, might not mean local builders aren't having their best quarter in 5 years. That being said, I am hearing that the low inventory in existing homes for sale seems to be happening in a number of markets, not just Greenville.

This all started in January of 2012, when the market really started showing signs of a big upturn. Folks who had been "sitting on the fence" started to get that motivation to move again. We saw more contract put on homes in the first and second quarters of 2012 than we saw at the height of the Greenville housing market. This really carried through the entire year, though not as much to the extent as we saw in the first half. What has happened now is our inventory is very low, 10% lower than this time last year, which was 15% lower than the year before. In neighborhoods that typically have higher demand for good homes, this is creating a feeding frenzy! Multiple offers and bidding wars are not uncommon because there isn't any competition. Homes that typically might have been considered overpriced or not in the best of condition are going under contract. Buyers are getting anxious, especially if they have already sold the home they are living in now.

I spoke with a friend from Charleston who is in the market for a home in the Mt. Pleasant area and he has heard their inventory is down by almost 75% from last year in the areas he is looking. Not an ideal time to be looking for a home to say the least!

Is there an answer? It would seem to me that inventory should begin to pick up here soon, but that all depends on the economy. Right now, other than our government officials not seeming to know how to find a middle ground on anything, optimism seems to be high. The stock market just hit an all time high and it is still one of the best times to buy a home. Interest rates are still low, so that shouldn't be the reason people aren't selling. Only time will tell if we are able to sustain this seller's market. If seller's don't already know, this is one of the best times to sell! So let's get moving! 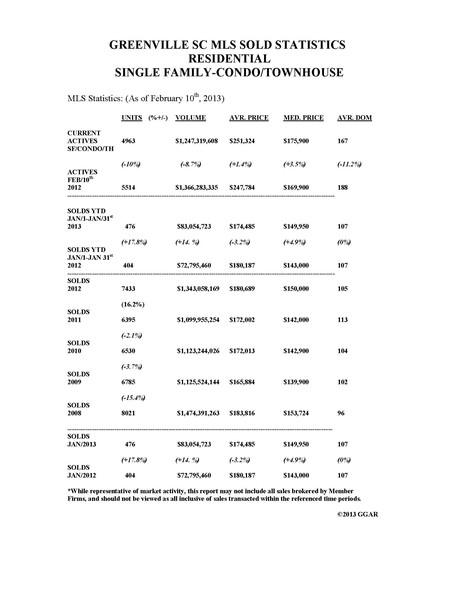